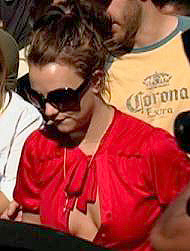 Britney Spears and Kevin Federline will appear in a downtown L.A. courtroom this afternoon to fight for the kids, and officials are anticipating a media circus.

Los Angeles Superior Court released a statement saying, “A second weapons screen station will be set up on the eighth floor tomorrow between the elevators and Department 88. Cell phones, recording devices and cameras will not be permitted past the weapons screen or in Department 88. Reporters are urged to make other arrangements for their cell phones.”

But Britney was reportedly not thrilled with what appeared to be her court-appointed monitor, who sat in the driver’s seat of Brit’s white Mercedes as they ran errands.

Count on extratv.com to bring you breaking custody updates throughout the day.

What Does Brad Pitt Smell Like? And More Celeb Secrets from… 5

Who's Who in the ‘Fast Times’ Table Read Featuring Jennifer… 8