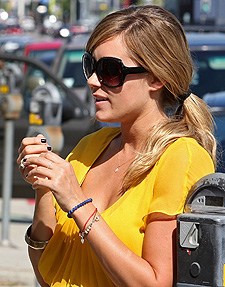 MTV's hit show "The Hills" is coming under fire from a former model who appeared on the show as Lauren Conrad's date.

Gavin Beasley is blasting the show as "scripted," telling VH1's "Best Week Ever" that MTV went so far as to set up scenes for drama.

He explained that one scene where he met Brody Jenner was set up so that "the audience would get a kick out of seeing 'the ex' talking to 'the new guy.'"

In addition, he asserted that Brody was always acting when the cameras were rolling.

"Brody would talk all this s--, then be like, 'Sorry about that, we're just trying to make good television,'" Beasley said.

As for Lauren, Beasley is not impressed.

"[Conrad's] kind of a conversation killer, and when the cameras are rolling, all conversation is kept firmly on the surface," he said.