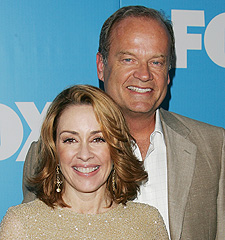 FOX’s new comedy “Back to You” is getting picked up for a full season. Fox Broadcasting Company President Kevin Reilly announced today that an additional 11 episodes have been ordered, bringing the total number of episodes for its premiere season to 24.

“Back to You” stars Kelsey Grammer as Chuck Darling and Patricia Heaton as Kelly Carr, two anchors at a Pittsburgh news station who are reunited after Chuck’s embarrassing fall from grace at his job in L.A.