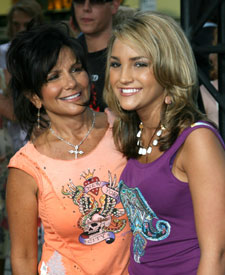 The two spent over an hour inside the Beverly Hills Hotel for their Parenting Without Conflict class. A judge ordered the sessions as part of their ongoing custody battle, which heads to court tomorrow. Both Brit, 25, and K-Fed, 29, are required to show.

On her way inside the swanky hotel, Brit was spotted carrying a book on parenting tips. She also raised eyebrows after what appeared to be medication was seen peeking through her purse!

Is the pop star battling a secret medical disorder?

The meds have been identified as Provigil, a prescription drug used to treat daytime sleepiness and narcolepsy.