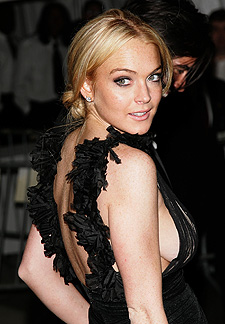 A new report says Lindsay Lohan may be returning to the club scene just weeks after leaving rehab.

There are reports that Lindsay, 21, will host a New Year’s bash at LAX in Sin City, though sources tell “Extra” she may take the mic at PURE Nightclub.

However, Lindsay is reportedly not happy about her new gig.

The starlet is reportedly contractually obligated to fulfill her hosting duties in Vegas, which were scrapped following her stint in rehab. She was reportedly paid upwards of $100,000 for a canceled gig at PURE for her 21st birthday.

What Does Brad Pitt Smell Like? And More Celeb Secrets from… 9