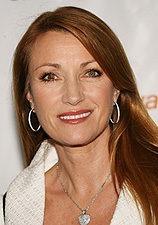 Jane Seymour’s husband James Keach is refusing to leave their Malibu home, despite a raging wildfire and an order that residents evacuate immediately.

“He’s standing there with the hose. There was a mandatory evacuation, but he refused to leave,” Jane told “Extra” after her “Dancing with the Stars” performance last night.

She added, “I haven’t seen him in two days. I begged him to leave.”

More than a dozen wildfires are scorching Southern California, from Santa Barbara to the Mexican border. Hundreds of thousands of acres have been burned, and at least 500,000 people have been forced from their homes.

Just today, President Bush declared a state of emergency in Southern California, paving the way for federal aid. The declaration follows a request for aid by Governor Arnold Schwarzenegger after he toured the destruction in Malibu.

In Malibu the fires have destroyed several homes and threatened hundreds more. Mel Gibson, James Cameron, Olivia Newton-John and many other stars have been forced to evacuate. Country singer Tanya Tucker's home has reportedly caught fire, and she has been forced to leave Malibu with her family and dogs.

Patients at the swanky Promises Rehab Center, which housed stars like Britney and Lindsay Lohan, have reportedly been ordered to evacuate.

Yesterday Britney told photographers she was “real scared” about the possibility of flames creeping toward her hillside mansion.

In San Diego, Tori Spelling and husband Dean McDermott are fearing for their property as a wildfire moves closer.

Their newly-renovated bed and breakfast Chateau La Rue is reportedly being evacuated.

Pics! Kelly Osbourne Gets Tattoo in Honor of Joan Rivers 10