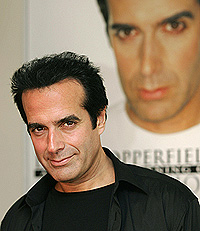 David Copperfield has canceled his upcoming magic shows in Southeast Asia following an FBI search of his Sin City warehouse and allegations of sexual abuse from an unidentified woman.

Copperfield was scheduled to perform in Thailand, Malaysia and Singapore in the next several weeks.

Last week, a Seattle woman came forward to accuse Copperfield of sexual misconduct. Though federal officials have been tight-lipped about the investigation, there are reports that the alleged incident occurred in the Bahamas.

Meanwhile, the FBI is denying reports that agents took millions of dollars in cash from Copperfield’s Vegas warehouse.

It was widely reported that agents seized 2$ million in cash, as well as a computer hard drive, but an FBI spokesman said no currency was seized during their investigation. The spokesman added that the bureau “will not discuss the case further.”

Jennifer Love Hewitt Did What on Her Wedding Day?! 7