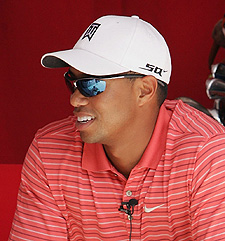 Golf superstar Tiger Woods has signed a whopping $100 million endorsement deal with Gatorade, moving him that much closer the $1 billion mark in career endorsements.

The biggest star in golf has signed deals with everyone from Nike to Buick to Gillette. This is his first deal with a beverage company.

The five-year agreement means he’ll even get his own trademark drink – Gatorade Tiger.

The new drink will debut in March, and will be available in flavors Tiger picked himself.