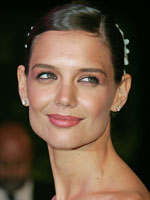 Was Katie Holmes once involved in a love triangle that sent shockwaves through the set of one of TV’s hottest shows?

Yes! “Extra” sat down with the WB’s Susanne Daniels, who was president of entertainment when Katie was lighting up the screen on “Dawson’s Creek.” She and Cynthia Littleton, deputy editor at Variety, gave “Extra” the lurid details from their new book, “Season Finale: The Unexpected Rise and Fall of The WB and UPN,” which is in stores now.

The North Carolina set of “Dawson’s” was rocked when Katie fell for co-stars James Van Der Beek and Joshua Jackson.

“Katie was first dating James,” Susanne explained. “Then fell in love with Josh. Then was dating Josh, then James and Josh were no longer roommates [because of that].”

In fact, Katie almost never landed the job that rocketed her to stardom.

“In primetime TV, it hacked off three share points from the show,” Cynthia revealed.

So was her short ‘do the demise of the show?

“I believe that’s true,” she confirmed.