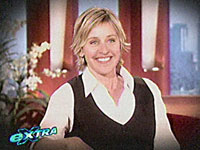 Ellen DeGeneres will announce on her show today that she'll stop publicly fighting to win Iggy the dog back from an animal shelter.

In an episode taped yesterday and set to air today, Ellen tells the audience, "It's gotten out of hand...but you don't resort to violence. So anybody out there, please stop that."

Yesterday the woman who owns the shelter that took Ellen's dog back said she feared for her life after receiving numerous death threats.

Now Ellen says she won't talk about the canine controversy again until the dog is returned. It has already been placed in another home.

The widely publicized doggie dilemma began last month when Ellen adopted the black Brussels Griffon mix from the Mutts and Moms dog-rescue shelter in Pasadena. Realizing the dog didn't get along with her cats, she gave Iggy to her hairdresser and the woman's young daughters.

Soon, Mutts and Moms caught wind of the exchange and demanded the dog be given back to the shelter, citing strict shelter policy.

Ellen says several agencies have offered to provide the family with a similar looking dog, but Ellen insisted, "It's not a toy that's broken that you can replace. It's a dog."

Today the stars are jumping to Ellen's defense.

Rosie O'Donnell writes on her blog that Ellen is "wonderful" and "deserves a vacation."