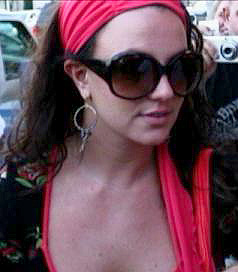 Britney Spears has turned herself in to police to be booked on misdemeanor hit-and-run charges.

She walked into a Van Nuys, Calif. police station around 9 p.m. last night wearing a black miniskirt and leather jacket. She wore large sunglasses, claiming she had pink eye.

She spent about 30 minutes being fingerprinted and photographed and was driven away by a male friend. The LAPD says they won't release her booking photo.

A police officer said Britney was not handcuffed or sent behind bars, and described her as "cooperative."

The charges stem from an Aug. 6 incident in which Britney slammed her white Mercedes into a parked car. She fled the scene, but the accident was caught on tape. She was also charged for driving without a valid license.

She's due in court to face those charges Oct. 25.