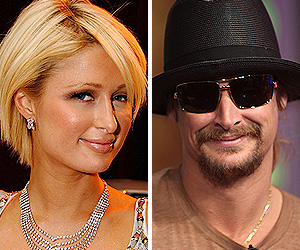 In what could be one of the oddest celebrity pairings ever, Paris Hilton has reportedly been spotted getting cozy with Kid Rock!

Paris and Rick famously made a sex tape together in 2003. Pamela is no stranger to sex tape scandals, as she and rocker ex Tommy Lee also made one several years ago.

Now Kid and Paris have been seen around Toronto together, sparking rumors that the two are dating. According to reports, the two hooked up at a nightclub there.

But today Paris' rep tells "Extra" that Paris only caught Kid's show and went to an afterparty with some friends.

"They are absolutely not dating," the rep added.

She's is in Toronto to film her next movie, “Repo! The Genetic Opera.” Kid is there to play a gig with his band.