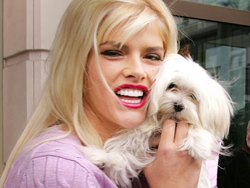 Investigators have begun serving search warrants regarding the death of Anna Nicole Smith.
California Attorney General Jerry Brown is expected to make an announcement about the inquiry sometime today.

Anna Nicole died of an accidental drug overdose in February at the age of 39. She had just given birth to her daughter Dannielynn, and her son Daniel had died of an overdose just days earlier.

Several people close to Anna Nicole have fallen under suspicion since her death. The Associated Press reports that her psychiatrist, Dr. Khristine Eroshevich, authorized all 11 prescription medications found in Anna Nicole’s hotel room the day she died.

According to documents obtained by the AP, more than 600 pills, including 450 muscle relaxants, were missing from prescriptions that were no more than five weeks old.

Did Charlie Sheen Make a Cameo in the 'Two and a Half Men' Finale? 8

The Latest: Lamar Odom’s Life ‘Will Never Be the Same' 9

Russell Crowe Opens Up About His Split from Danielle Spencer 10