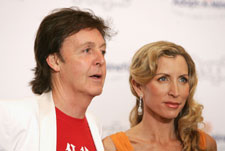 It could have been the biggest celebrity divorce settlement ever in Great Britain.

But now “Extra” has learned that Heather Mills may have blown a $100 million payday from ex Paul McCartney – by refusing to stay quiet!

The former Beatle spent eight hours in a closed courtroom in London with Heather yesterday hashing out the details of their divorce settlement. But the talks reportedly broke down when she refused to sign a confidentiality clause agreeing not to dish about their five-year marriage!

Now a British paper is reporting that the deadlocked case may lead to a full public trial.

According to the paper, Paul offered Heather more than $100 million in a deal that asked her to keep quiet. She was reportedly willing to accept millions less but refused the confidentiality pact.