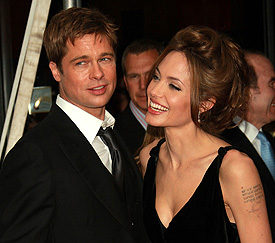 “Extra” spotted Angelina Jolie with son Maddox leaving the elite Lycée Français school in New York, with Mad carrying what appeared to be a present from his classmates.

Was it a farewell gift?

Yes! The world’s most famous family is reportedly packing their bags and leaving New York City, and Maddox's classmates gave him a memory book to take with him.

Brad Pitt has just finished filming his latest movie there, and now the family is reportedly ready to leave. The couple and their four kids – Maddox, Pax, Zahara and Shiloh – have homes in Los Angeles and New Orleans.

Meanwhile, does Angelina have a bone to pick with Brad’s famous pal George Clooney?

That’s the rumor after she ditched the Big Apple premiere of George’s new thriller, “Michael Clayton.”

Though Brad was on hand to support the drama last month, Angelina was nowhere to be seen. A new report claims that she looks down on George for his wild ways and fears he could distract Brad from his duties as a father.