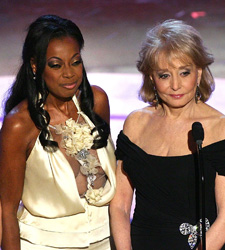 “Extra” spotted Star Jones and her ex-boss, Barbara Walters, together for the first time since Star abruptly left “The View” more than a year ago.

The two reunited for a breakfast at the Carlyle Hotel in New York, and a source close to “Extra” said Whoopi Goldberg was behind the reunion!

The breakfast was a result of Star’s comments during an interview with Whoopi on her Court TV show in which she told Whoopi to let Barbara know she misses her.

When asked about the meeting, Barbara’s rep told “Extra,” “It was a friendly breakfast. They are happy to start a new chapter in their lives.”