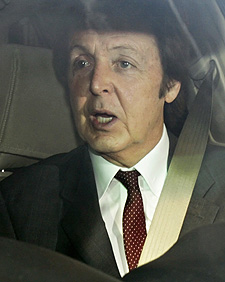 Paul McCartney and Heather Mills’ split is one of the most contested and nastiest divorce in British history.

But can they work it out?

The two appeared today in a London courtroom to reportedly reach a settlement.

If they strike a deal, Heather, 39, may make a whopping $120 million! Paul, 65, would also pay annual financial support for their 4-year-old daughter Beatrice.