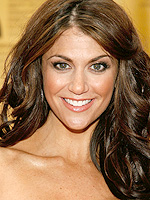 "Dancing with the Stars" host Samantha Harris will return to the show next week.

The new mom, who gave birth to daughter Josselyn Sydney Hess in September, will return Oct. 15 and stay for the remainder of the season.

Host Drew Lachey announced last night that he was "filling in one last time" for Samantha before he announced that Wayne Newton would be packing his bags, as well.

Backstage, Wayne told "Extra" he knew the end was near. He joked, "When the crew starts coming up saying, 'Can we get a picture with you?' I'm thinking, 'Uh-oh, they know something I don't!'"