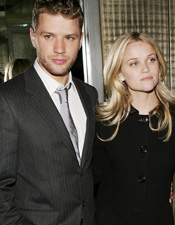 "Extra" has obtained court documents that show her status as a married woman to Ryan Phillippe was terminated Oct. 5.

Reese and Ryan separated last year after seven years of marriage. Reese cited "irreconcilable differences" in her divorce filing. They have two children together: Ava, 8, and Deacon, 4.

Though they are now legally free to marry other people, their divorce won't be final until the two settle their financial and custody agreements. They are both seeking shared custody.