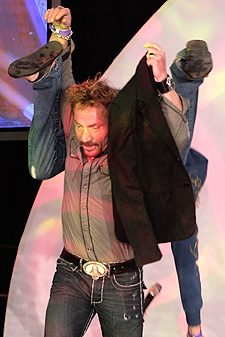 The suit stems from the jaw-dropping Oct. 2 incident at the Fox Reality Channel Really Awards when Bonaduce threw Fairplay over his head. Fairplay landed face-first on the stage. In the lawsuit, Fairplay – real name Jon Dalton – claims that he lost several teeth and no one bothered to call an ambulance.

He claims that he was lying on the ground as “Mr. Bonaduce proceeded to parade around the stage with pride in the attack that he had just committed and encouraged the audience to applaud his conduct."

He said he’s filing the lawsuit to make the defendants, which include the Fox Reality Channel as well as the owner of the club where the incident took place, pay for their “tortuous actions.”

Last week, L.A. prosecutors declined to file charges against Bonaduce, saying that the star acted in self-defense after Fairplay jumped on him.

The Fox Reality Really Awards are scheduled to be broadcast on Saturday.