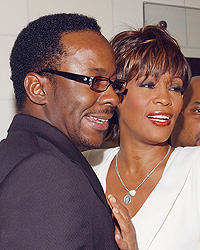 Singer Bobby Brown suffered a heart attack and was treated and released from an L.A. hospital.

The 38-year-old performer experienced extreme chest pains last night and was admitted to Tarzana Regional Medical Center. His attorney said today that he suffered a mild heart attack as a result of “stress and diet.”

He is now in good condition and “in great spirits,” according to his attorney. His father and brother are by his side. It’s not clear if Brown will be able to perform at a scheduled concert on Saturday night.

The “My Prerogative” singer is currently locked in a bitter custody battle with ex Whitney Houston over their teenage daughter Bobbi Kristina. Their next court appearance is scheduled for Oct. 22.