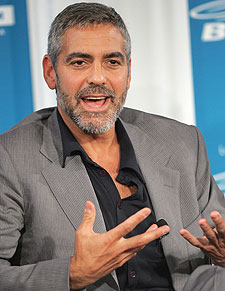 Is George Clooney throwing himself into the race for President of the United States?

That’s the rumor that’s been running wild throughout Hollywood for several months. Even pal Brad Pitt said he’d like to see George run.

Now George is finally responding to the reports, telling Time magazine, “No. As an advocate, I can take a side and stand by it and not have to worry about ticking off some constituents who helped get me elected. I don't want all those kinds of strings attached.”

George also told Time that his plans for the future may mean less of his gorgeous face on the big screen.

“My hope is that as time goes on and people want to see less and less of me on screen, which happens to everybody, I'll be able to direct,” he revealed.