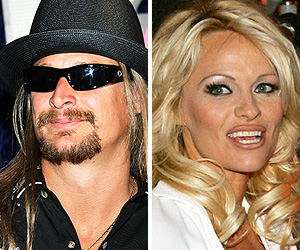 Pamela Anderson's former husband, Kid Rock, has some words of wisdom for her new husband, Rick Salomon – advice he says he only wishes someone had offered him.

"Why buy the cow, when you get the milk for free?" Rock, 36, said Monday on the "Late Show with David Letterman."

As the in-studio audience groaned in response, the rocker said, "C'mon … lighten up."

"I wish them much happiness," added the musician, sounding slightly glib about his ex's new marriage.

"And I think they will be," said Letterman, ever more archly.

Anderson, 40, married for the third time Saturday night in Las Vegas. The groom, 38, is perhaps still best known for being Paris Hilton's costar in her notorious 2003 sex tape.

Kid Rock mentioned being "bullied around for so long" that he couldn't take it anymore, and Letterman asked if he expected legal trouble as a result of what took place.

Lindsey Vonn on Hanging with Elin Nordegren, Her Ex's Ex-Wife 9