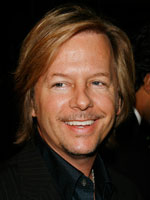 David Spade has donated $25,000 to the family of a fallen police officer after being moved by the tragedy.

Arizona police officer Nick Erfle was shot and killed in Phoenix after attempting to arrest a man. He left behind a wife and two young sons.

David, an Arizona native, promptly called in his donation after he heard the news. He told the Associated Press that he was “hit out of the blue” by the heartbreak – especially sine Erfle had overcome cancer.

"It just struck me as such a rough situation just because cops in general get kind of a bad rap lately and people forget it is the scariest job out there,” he said. “I'm from Arizona so I'm always a little aware of things that are going on there."