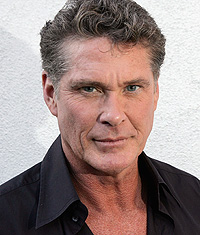 David Hasselhoff has suffered a relapse in his battle with alcoholism.

The 55-year-old actor checked into a Los Angeles hospital yesterday and sought treatment. His rep tells "Extra" that he returned home last night, saying, "There's nothing more for me to say other than he went home last night and is doing fine."

Earlier this summer, the former "Baywatch" star was videotaped by his daughter intoxicated on the floor of a bathroom. The footage turned into a major scandal for David, and soon after, he began fighting for custody of his two daughters with ex Pamela Bach.

He won primary physical custody of daughters Hayley, 15, and Taylor, 17, in June, but they had been staying with Pamela while David filmed "Anaconda 3" overseas.

It's not clear if and how his recent relapse will affect the existing custody agreement. A mediation hearing is scheduled for Thursday.