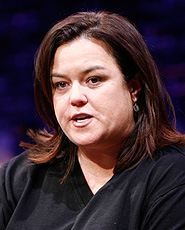 Rosie O’Donnell raised eyebrows last night when she jumped on stage during Roseanne Barr’s NYC comedy routine and declared, "When I was fired by Barbara Walters…”

The statement varies drastically from what Rosie and executive producer Barbara announced after her departure. Barbara insisted the decision was mutual.

Rosie also reportedly claimed that “View” producers insist the women wear earpieces, which dictate what to say. But Rosie said she refused to wear them.

But today Rosie's rep said that she was just joking, saying, "Rosie was not fired. She was doing a comic bit...Rosie herself chose to leave early and was not fired!"

Rosie said on her blog that the joke was "taken out of context." The true story about leaving, she writes, is that she "asked for $10 million" to stay on the show, but "they said no."