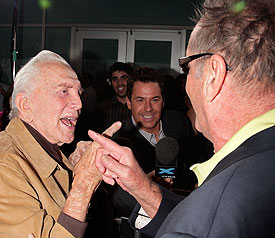 He stopped to chat with Kirk Douglas and explain a little Hollywood history.

Nicholson declared, “Are you down here to complain about not getting this part again?”

Kirk still kids Jack about stealing his Oscar winning lead role in “One Flew Over the Cuckoo’s Nest.”

But Jack joked, “My point of view is he stole my project to begin with! I tried to option it in 1963 as a producer, and he already had it.”

It was just one of the surreal scenes from the event, which brought together Clint Eastwood, Warren Beatty, Angela Lansbury, Rob Reiner and George Lucas.

Lucas gave us an exclusive “Indiana Jones: 4” update, explaining, “The movie is going really well. I'm very excited. We've got about another week to shoot, on schedule, on budget. Everything is fantastic.”

Vanessa Bryant Fires Back at Her Mom’s Shocking Claims 5