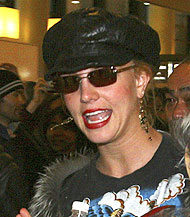 Britney Spears has handed her two boys over to Kevin Federline following a judge’s order that she temporarily lose custody.

The troubled pop star reportedly gave Sean Preston, 2, and Jayden James, 1, to Kevin’s bodyguards yesterday before driving to the DMV to finally apply for a California driver’s license. She also reportedly went tanning just after dropping off the boys.

Today, there are new reports that Britney’s failure to apply for that license may be one reason she temporarily lost the kids.

Britney has been charged with misdemeanor driving without a valid license and hit-and-run after a caught-on-tape fender-bender in a parking lot on Aug. 6.

Just weeks ago, a judge called Britney a “habitual drug and alcohol user” and ordered her to undergo twice-weekly random drug and alcohol testing. She was also ordered to enroll in parenting classes. New rumors today claim she never even signed the judge’s order.

The next hearing is set for Wednesday.

Britney has reportedly left her Malibu home and checked into the Peninsula Hotel in Beverly Hills.