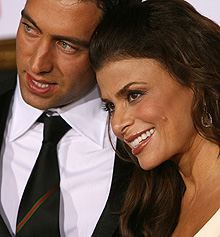 The "American Idol" judge tells USA Today, "That's the next step in my life. Definitely within the next two years. I thought by now I'd have three grown children."

Paula says that she's ready for motherhood despite her age. "With modern medicine, people are having kids in their 40s and even up until their late 40s. In their 50s, they're having their second child," she said. "If it doesn't happen naturally like that, I would always consider adopting."

Paula's love life has finally taken off with boyfriend J.T. Torregiani, 32. The restaurateur met Paula several months ago and they've been going strong since.

Fellow judge Simon Cowell even likes him. Paula said Simon told her in typical Mr. Nasty fashion, "He's a great, normal guy - why does he like you?"

Paula has been married twice, to Emilio Estevez and Brad Beckerman.