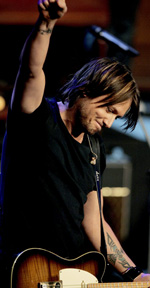 Keith Urban crashed his motorcycle while trying to avoid a paparazzo in Sydney. The country crooner escaped uninjured and has released the following statement:

“Today’s incident was the result of one person’s desire to do his job and my desire to maintain my privacy. Some have already attempted to inflate the facts, but the reality is this; while out riding to an AA meeting, a time when my privacy is especially important to me, I felt myself being pursued.

I sped up, and in an effort to elude an oncoming car which was making an illegal u-turn, saw no choice but to drop my bike. In actual fact, my pursuer came to my assistance, without taking photos, and helped me from the road. I returned home, got my car, and continued on my way.”

Keith and superstar wife Nicole Kidman share homes in their native Australia as well as Nashville. They have been married since June 2006.