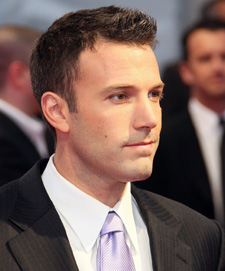 Ben is the man behind the heart-wrenching new drama, which tells the story of a little girl snatched from her family and the attempt to rescue her. But Ben admitted taking the reigns came with its challenges.

“I was scared a little bit,” he admitted. “I had trepidations.”

Ben made it a bit easier for himself by casting his little brother Casey – now getting rave reviews for “The Assassination of Jesse James by the Coward Robert Ford” – as the lead police detective.

“He was the best guy for the job,” Ben insisted.

Added Casey, “He being my brother and being my director, it was only an advantage because we are comfortable with each other.”

One thing Casey had trouble with: watching his big brother boss around co-stars Ed Harris and Morgan Freeman.

“It was great to watch across the room, Ben giving direction to Morgan Freeman,” he said. “I'm like, ‘Who are you kidding, bro? Don't you tell that man what to do!’”

Ben is definitely calling the shots these days. He’s got a solid idea of what he wants his career – and his family life – to be. And he insisted the two will never mix again.

“Probably we wouldn't do any movie together as actors,” Ben said about wife Jennifer Garner. “For one thing we try very hard not to ever be working at the same time for management of our family.”

Ben and Jen starred together in the 2003 comic movie “Daredevil.”

But there is one Jen he’s happy to work with: Jennifer Aniston. They’re filming the movie version of the best-selling book, “He’s Just Not That Into You.”

“I was lucky enough to pop in for a few days for a cameo,” he said. “Extra” spotted the two locking lips during filming.