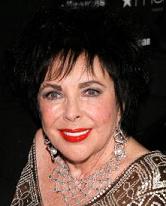 Hollywood legend Elizabeth Taylor came out of seclusion last night to bring some star power to an HIV/AIDS fundraiser.

Elizabeth, looking glamorous at 75, arrived in a wheelchair to the annual Macy’s Passport event in Santa Monica, which seeks to raise millions for the prevention and research of the disease. She was honored with the event’s first Humanitarian Award for AIDS Activism.

Before the show, a relaxed Elizabeth said, “I’m going to try and walk on the stage tonight. And say a little prayer for me that I don’t fall.”

Elizabeth did walk on stage – to a standing ovation.

When she took the award, she resolutely declared, “I was here at the first night, here last year. I will continue to be here until we defeat the enemy of HIV and AIDS.”

Elizabeth’s longtime friend and fellow legend Rock Hudson died of AIDS in 1985. Since then, Elizabeth said it’s been her mission to raise awareness of the disease.

But it wasn’t always easy.

“I used to have doors slammed in my face, telephones hung up on me," she told the Associated Press. "This (is) 100 percent turnaround."

Elizabeth, who has been married eight times, also finally addressed the rumor that she’s engaged to her much younger boyfriend Jason Winters, whom she brought to the event.

Then, she actually howled.