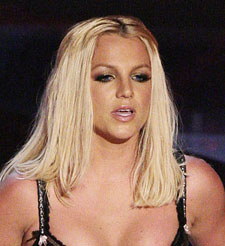 Britney Spears was seen in tears, texting and crying amid a camera crush at her lawyer’s office, just minutes after finding out that she could go to jail for up to a year for a hit-and-run accident that happened in August.

But that may just be the tip of the Britney legal iceberg. Spears’ ex-bodyguard, Tony Barretto, known as Fat Tony, broke his silence this morning on the “Today” show, claiming he witnessed Spears doing drugs at an LA nightclub restroom.

As for the drug use, Barretto said, “We escorted her to a private restroom upstairs, which we secured for her. She was in there for some time alone. I knocked and peeked in, and I observed this behavior.”

Fat Tony claims this wasn’t the only time. He said he also found Brit in a Los Angeles hotel room.

“She was sweating and shaking, and the room was a mess,” Barretto said, adding that he did see evidence of drug use in the hotel room.

Barretto said he never felt comfortable confronting Spears, admitting, “It was almost forbidden to talk about her personal life. And you know Britney doesn’t listen to nobody.”

Today, the woman at the center of Britney’s other legal battle, her hit-and-run, is also speaking out.

“I feel sorry for her,” said Kim Robard-Rifkin, whose car Britney smacked not once, but twice. “But enough is enough. You hit my car!”

Kim told celebtv.com that the whole thing could have been avoided if Brit had paid the $3,000 in damages, and now she has this message for Spears:

“Check into rehab. Get a good shrink. You’re not going to be young and beautiful forever.”

Elle King Opens Up About Secret Marriage, and Why It ‘Crashed and… 9