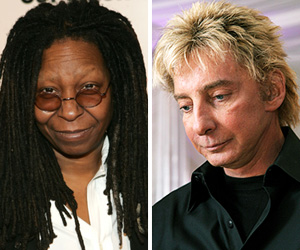 The women of “The View” are now addressing the controversy surrounding Barry Manilow’s refusal to appear next to Elisabeth Hasselbeck.

Whoopi Goldberg began this morning’s show and explained that someone in Manilow’s camp had requested that he not sit next to Hasselbeck.

She then stated, “If you don’t sit with one, you sit with none,” to which the audience applauded.

All the women – Whoopi, Joy Behar, Hasselbeck and Sherri Shepherd – seemed to be in agreement that Manilow’s decision to cancel his appearance due to Hasselbeck’s conservative political views was a shame.

“We’ve had liberals, we’ve had Republicans – we service everybody!” joked Goldberg.

Goldberg pointed out that the decision about Manilow’s appearance was ultimately left to executive producers Barbara Walters and Bill Geddie.

Hasselbeck insisted, “We are courageous women who sit here everyday and love each other through our differences – not despite them. I think that’s a wonderful thing.”

But all is not lost with Manilow: Goldberg said that at some point he will appear on the show.