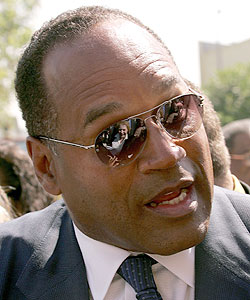 O.J. Simpson has made his first appearance in a Las Vegas courtroom, where the judge granted him a bond deal.

The judge set his bail at $125,000 and ordered him to surrender his passport.

At one point, Simpson – handcuffed and seated next to his attorney – closed his eyes as the judge spoke. He said little as the judge asked him if he understood the felony charges leveled against him. "Yes," he replied.

Simpson has been ordered to refrain from any “direct or indirect contact” with witnesses in his case.

If convicted, he could face life in prison.