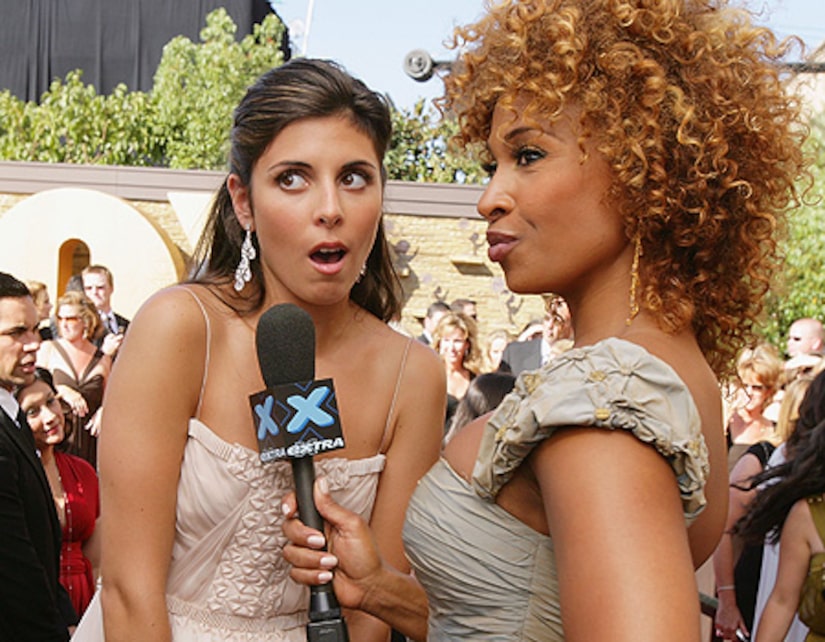 It was all glitz and glamour for television's biggest night as stars flooded the Shrine Auditorium for the 59th Primetime Emmy Awards, and "Extra" is revealing the surprises and secrets from the star-studded show.

"My own mother said I didn't have a shot in hell of winning tonight," she said as she fought back tears, "So I don't have anything prepared."

The camera quickly cut to her stunned mother, who sat in the audience with her mouth open. That prompted Katherine to quickly emphasize that her mom is a "big supporter" as the crowd laughed.

Before Katherine took the stage, she uttered an expletive as her name was announced, causing producers to delay the broadcast.

The "Grey's Anatomy" stunner was just one of many stars whose words caused the censors to work overtime.

Ray Romano joked about Patricia Heaton sleeping with her "Back to You" co-star Kelsey Grammer, causing FOX to cut away for a few seconds.

Sally Field's emotional speech about the Iraq War caused another censorship when she declared, "And, let's face it, if the mothers ruled the war, there would be no (expletive) wars in the first place."

After the show, Sally joked to "Extra" that since she's being censored, "I'm on my way to becoming a star."

America Ferrera, who scored an Emmy for her breakout role on "Ugly Betty," told "Extra" she tried not to cry as she took the stage and admitted, "I'm going to wake up and I'm going to say, 'I won an Emmy!'"

One of the night's biggest winners was "The Sopranos," which scored Best Drama as well as wins in writing and directing.

But James Spader beat out James Gandolfini for Best Actor in a Dramatic Series in a surprise upset, causing Spader to quip, "I feel like I just stole a pile of money from the Mob."

On the red carpet, the stars brought old Hollywood glamour to the Shrine with red lips and dramatic, side-swept hair.

Christina Aguilera stole the spotlight with a well-placed black bow over her belly, causing more speculation that the star is pregnant.

But she continued to stay mum about impending motherhood when "Extra" quizzed her about the bump.

Inside the auditorium, Ryan Seacrest brought a personal flair to his hosting duties when he gave a shout-out to celebrities like Teri Hatcher and Hayden Panettiere.

He congratulated Hayden on turning 18 and said that as a present he had seated her as far away as possible from "Entourage" star and Emmy winner Jeremy Piven, causing the audience to burst into laughter.

Britney Spears was a no-show, despite published reports that the star would appear to apologize for her MTV VMA performance.

But even without Britney, there were plenty of surprises.

Kanye West shocked the after-party crowd at Hollywood hotspot Les Deux when he made an impromptu appearance with John Legend. Hundreds of partygoers rushed the stage as Kanye gave an explosive performance of "Gold Digger."

Inside the "Extra" after party, Jeremy Piven joked that he's the only straight man to bring his mother as his date after year, only to bring his sister for the Emmys!

Jamie-Lynn Sigler told "Extra" she was relieved "The Sopranos" took home some major honors, admitting that she was "a little worried" before the show.

Thankfully for the cast, "The Sopranos" was able to go out with a bang.