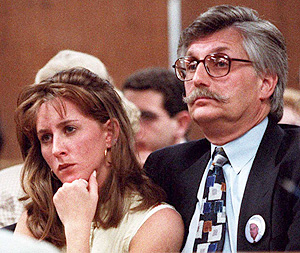 “Extra” went one on one with Fred Goldman about O.J. Simpson’s arrest. He declared, “I’m not surprised at this happening. He does what he wants, when he wants. He is sort of like the master puppeteer. He manipulates people as he wants.”

He continued, “If you think in terms of his behavior, it doesn’t surprise me at all.... There’s nothing lower than a person who murders two human beings. There’s nobody lower than him.”

Recently, Goldman was awarded the rights to Simpson’s book, "If I Did It," and he's sticking by his decision to publish it.

He said, "I’m thrilled that people are reading the book. It is, in fact, as we view it, an admission of guilt. It’s an important read.”

When we played the audio tape of Simpson's alleged confrontation with a sports memorabilia dealer, Goldman reacted, “I hate to sound redundant. But, he’s just a nasty S.O.B. That is just who he is. We seem to forget that out of a fit of anger…because things weren’t his way, he murdered two people. Out of a fit of anger he’s screaming and yelling…it’s all a part of the same monster. I don’t think there’s any doubt that this is his voice.”

Simpson was found not guilty of murdering Nicole Brown Simpson and her friend Ronald Goldman. But he was found liable for their deaths in a civil trial.

“During the civil trial he was found accountable for Ron’s death, $19 million dollars," Goldman said. "The system doesn’t give you the easy opportunity to collect on it, to really nail him. He continues to make money."

He declared, “O.J.’s a piece of trash. He’s a murderer. He believes the world is his to play with as he wants. He’s never done anything other than play football.”