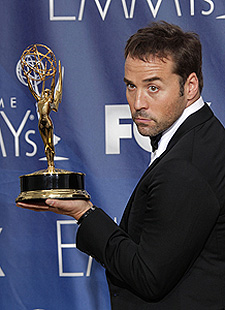 The Emmy Awards are underway, and “Extra” is first with the list of winners as they are announced!

"The Sopranos" has swept the Emmy's with awards for Best Drama, Best Directing and Best Writing.

- Ricky Gervais, Best Actor in a Comedy for "Extras"

- Judy Davis, Outstanding Supporting Actress in a Miniseries or Movie for "The Starter Wife"

- Sally Field, Best Actress in a Drama for "Brothers & Sisters."

- Jon Stewart for Outstanding Variety, Music, or Comedy Series for 'The Daily Show With Jon Stewart'

- Jamie Pressly, Outstanding Supporting Actress in a Comedy Series for “My Name is Earl.”

- Robert Duvall, Outstanding Lead Actor in a Miniseries or a Movie award for 'Broken Trail'

- Alan Taylor, Oustanding Director of a Drama Series for "The Sopranos"

- David Chase, Outstanding Writing for a Drama Series, "The Sopranos"