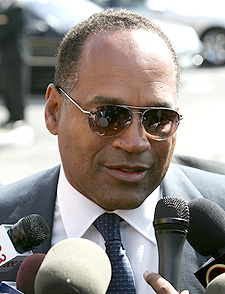 The spokesman said they received a call last night “from a victim of an armed robbery” who stated that one of the suspects was Simpson.

No weapons have been found.

The hotel room was allegedly broken into and sports-related products were taken. Simpson has been named a suspect. He has denied breaking into the room and insisted that “nobody was roughed up.”

The Las Vegas Police Department is not releasing exactly what those items were, nor will they release any police reports.

Simpson is “cooperating” with the police department, and he has not been arrested. The investigation is still underway, and police are looking at surveillance video and continuing to interview both suspects and witnesses.

Simpson told the Associated Press this morning that he was conducting "a sting operation" to collect sports memorabilia that belonged to him.

He said that an auctioneer Tom Riccio called him several weeks ago to say some collectors "have a lot of your stuff, and they don't want anyone to know they are selling it."

Simpson said he arranged to meet Riccio at the hotel and insisted no one was hurt.

"Everybody knows this is stolen stuff," Simpson said. "Not only wasn't there a break-in, but Riccio came to the lobby and escorted us up to the room. In any event, it's stolen stuff that's mine.”

Since being found liable in a wrongful death lawsuit following the murders of Nicole Brown Simpson and Ron Goldman, Simpson has been ordered to pay more than $30 million to the Goldman family.

He has had to auction off his sports collectibles, including his Heisman Trophy, to pay some of the millions awarded in the civil trial.