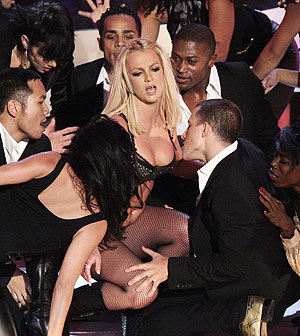 “Extra” spotted a sullen Britney Spears boarding a plane and leaving Las Vegas yesterday, where we have learned she might be looking for a new nanny.

The troubled pop star has been distraught for days, as “Extra” spotted her immediately after her performance at the VMAs with her head down, rushing past photographers. Britney was reportedly in tears.

But Britney’s worries over her comeback performance didn’t stop her from partying.

She was spotted exiting a car outside a Vegas hotel without any underwear – again!

Today there are new revelations about what may have led to Britney’s meltdown, which reportedly started with some backstage boozing.

The New York Post says Britney showed up late to rehearsals the day before and was tossing back margaritas.

The Post also claims Britney refused to do the more complicated dance numbers, which caused the worried dancers to ask friends “to pray for them.”

Us Weekly’s Ken Baker tells “Extra” that Britney may have been drinking beer and Vodka just hours before going on stage. But he also says that other sources insist Britney didn’t have a drop to drink that night.

Paves tells “Extra” that while he did go to the Palms Casino Resort, he “made the professional decision not to do her hair for the VMAs.”

So Britney did her own ‘do – and that was just the beginning of her makeover mess.

She reportedly refused to wear her stylist’s clothing and instead dressed herself in black panties and a sparkly bra.

After she wrapped up the performance, Baker says she “got off stage and immediately was in tears, and she was overheard saying, ‘I looked like a fat pig.’”

Kanye West, who was furious after losing out in all the categories he was nominated in, says that MTV “exploited” Britney because she wasn’t ready to perform.

He told New York radio station Z100, “They exploited Britney in helping to end her career… When Britney was opening, near the end, I felt so bad for her. I said, 'Man, it's a dirty game. This game will chew you up and spit you out.'"

He also told “Extra” today that Britney was “not in her right mind” when she performed and that MTV shouldn’t have encouraged a performance.

It’s the same sentiment Ellen DeGeneres has about the fiasco.

She said on her show today, “I felt bad because somebody should've said, ‘Don't do it – there’s too much expectation, you've got to really, really deliver if you're going to do this.’”