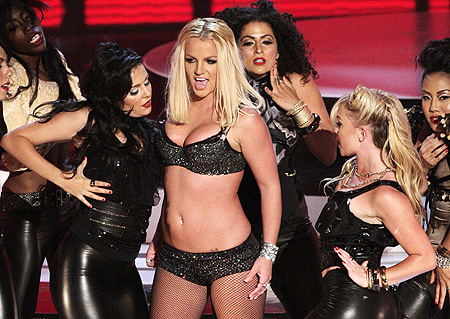 What happened to Britney Spears' long-awaited comeback to pop superstardom?

That's the question on everyone's mind as her performance of "Gimme More" crashed and burned at the MTV Video Music Awards last night.

Just six years ago, the one-time pop princess tore up the VMA stage with a snake around her neck, and she later famously smooched Madonna.

But this time, Britney was bleary-eyed in a black sequined bra and hot pants, and she drew harsh reviews from critics nationwide.

Most of the celebrity audience sat stunned at her attempts to dance and lip-sync through her single.

At the Tao after party, Jermaine Dupri's review was mixed.

"I don't know if she should've started the show off," he said. "But I thought it was all right."

Today, Britney's ex Kevin Federline tells "Extra" he has no comment about Britney's song and dance.

So just what went wrong?

One report says Britney phoned in her performance after finding out host Sarah Silverman was going to crack a joke about her kids.

After Britney performed, Sarah quipped, "They are the most adorable mistakes you will ever see."

Other reports say her original act, inspired by illusionist Criss Angel, was nixed by MTV.

Before the show, Criss explained to "Extra" why he suddenly disappeared from the show.

"In the initial meetings that we had I gave my professional creative advice, but I stepped out of the picture," he explained.

Britney's big bust may have also been caused by one of her signature wild weekends.

Though Britney was deep in rehearsals on Friday afternoon, "Extra" caught her partying in the early morning hours at Diddy's Pure nightclub bash.

She didn't leave the party until 6 a.m.

On Sunday, she hit three separate parties, starting at 12:30 a.m., reportedly ending at dawn just 12 hours before she took the stage.

On the red carpet on the night of the show, all of Hollywood was in her corner.

Mary J. Blige said, "She absolutely deserves to pull this off tonight."

Blogging king Perez Hilton may have said it best when he said, "The worst thing that could happen to Britney would be for her show to be mediocre."

Unfortunately, it appears that the world will have to wait another day for Britney's real comeback.