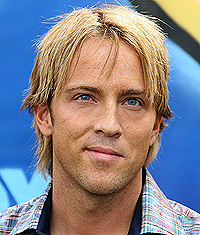 A bombshell new rumor about Anna Nicole and her baby Dannielynn is rocking Larry Birkhead and the magazine with which he had a close relationship.

New reports say Larry and Howard K. Stern, who both claimed to be the baby’s father, struck a hush-hush deal during the custody fight over Dannielynn.

New York Daily News Gatecrasher Ben Widdicombe gave “Extra” the stunning details of the alleged secret deal, saying, “Larry would get to keep the baby in return for splitting the money if she comes into it from Anna Nicole’s late husband Howard Marshall.”

Now, OK! magazine has suddenly dumped Larry as their next cover-boy, saying they have uncovered “shocking and incriminating” information and have a “moral obligation” to little Dannielynn. The magazine was reportedly set to pay Larry $1.7 million for exclusive access to Dannielynn’s first birthday.

The supposed deal between Larry and Howard Stern is the story leaking from an explosive new book called “Blonde Ambition: The Untold Story Behind Anna Nicole’s Death,” written by TV journalist Rita Cosby.

OK! Editor Sarah Ivens told “Extra” today, “My biggest fear is that Larry and Howard may have tricked us all.”

But Larry told TMZ.com that the “shocking information” is merely part of a smear campaign against him after Us Weekly put Dannielynn on its cover.