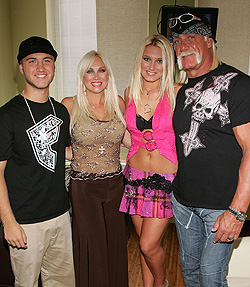 The Hogan family has reportedly hired an attorney after son Nick totaled his car in a high-speed crash that left his passenger critically injured.

Hulk Hogan’s son Nick, 17, wrapped his Toyota Supra around a tree Sunday night in Florida in a wreck authorities say was caused by “excessive speed.”

While Nick was treated and released from a hospital, his passenger, 22-year-old John Graziano, a Marine, is in critical condition.

Nick pleaded yesterday for family and friends to “pray for his friend.”

No charges have been filed in the crash, but it is still under investigation.

As authorities piece together what happened, new information is emerging about Nick’s high-speed past.

According to Florida’s Department of Highway Safety and Motor Vehicles, Nick has been cited four times for speeding since getting his license in 2005.

Just weeks ago, he was cited for traveling 82 mph in a construction zone while workers were present, according to Pinellas County, Florida court records. The posted speed limit was reportedly 45 mph.

A court date for that case is scheduled for Sept. 10.