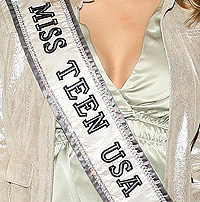 When Miss South Carolina Caitlin Upton tried to explain why many Americans can’t locate the U.S. on a world map, her “answer” was heard around the globe.

Upton stammered, “U.S. Americans are unable to do so because, uh, some people out there in our nation don’t have maps.”

That statement literally put the 18-year-old beauty queen on the map, and unbelievably, she still finished fourth in the Miss Teen U.S.A. competition!

But this morning on the “Today” show, she tried to chart her course to redemption, saying, “I was overwhelmed, and I made a mistake.”

“Extra’s” own Mario Lopez, who hosted this weekend's show, is revealing what you didn’t see during the cringe-inducing moment.

He tells us, “I snuck a peek at the audience and everyone was squinting, and you could hear a pin drop…I noticed my head was starting to sink because she kept going on and on, and I’m like, ‘Poor thing!’”

About the question, Mario adds, “I think she misunderstood it.”

This morning the embarrassed teen queen got a re-do this morning, offering, “I believe that there should be more emphasis on geography in our education so people will learn how to read maps better. Yay!”

Was this just another case of the Mario Lopez pageant curse?

“Last time, Miss U.S.A. wiped out,” Mario joked. “Miss South Carolina sort of had a mental wipe out. I’m looking forward to the next one to see what happens because every time I do it something bizarre happens on stage!"

"Extra" wants to put you on the spot: Why do you think Americans can't locate the U.S. on a map? Leave us a video comment!

Hollywood Reacts to the Death of George Floyd 10