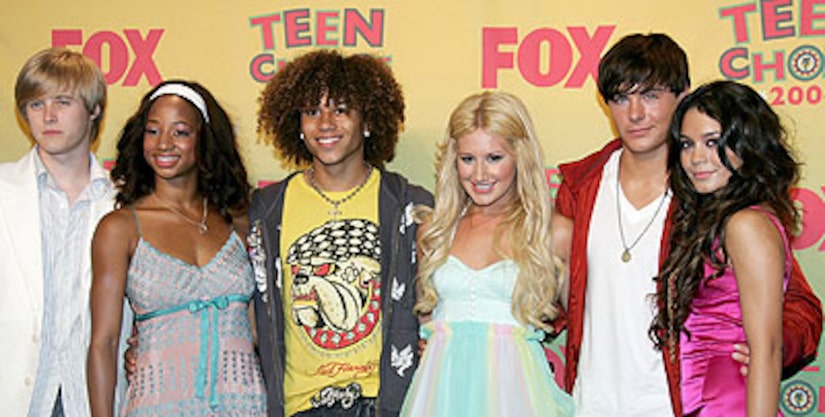 As summer romance stories surrounding Zac and Vanessa continue to heat up, tabloids have begun calling them "Zanessa," in the realm of "Brangelina!"

But is trouble brewing for the next 'High School' assignment?

Reports say the cast is holding out on negotiations for "High School Musical 3."

"The thing is all those rumors are completely false," blasted Vanessa. "Everyone is still in negotiations."

Cheryl broke news about her upcoming "Dancing" partner, revealing he's an older stud - though that's all she would say.

John Travolta strolled the green carpet, saying that it feels good to still be hanging with young Hollywood.

"It just goes to show you that you can still be around at my age!" he joked.

Ryan Seacrest, who took Choice Movie Hissy Fit for his hilarious cameo in "Knocked Up," gave "Extra" the scoop on hosting this year's Emmys.

"It's going to be a night that looks different from the start that feels raw and spontaneous and very alive," he revealed.

Hosts Nick Cannon and Hilary Duff sounded off about the pitfalls of young Hollywood's stars.

"I don't really live as publicly as those people," Hilary said about staying out of trouble. "I enjoy my privacy."

Avril Lavigne had her own strong words for troubled celebs.

She said, "I think people get caught up in Hollywood and the career and the celebrity and I've never really cared about that."

Other big winners at the two-hour show included "Pirates of the Caribbean: At World's End" with Choice Movie, while Johnny Depp and Keira Knightley took home Choice Movie Actor and Actress.