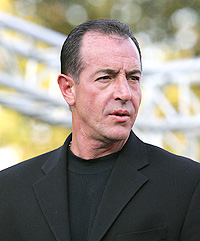 Michael Lohan spoke exclusively with “Extra” Wednesday about his relationship with Lindsay and his estranged wife, Dina.

Michael’s reaction to the new photos that surfaced of his daughter, Lindsay, out of rehab and tanning was not one of approval.

“Does Betty Ford let its people out? Absolutely not,” he said. “I’m upset about this. They should never let any patient out.”

The ongoing custody battle between Michael and his estranged wife, Dina, has made national headlines.

“I called mom earlier and asked her how to get through to you…She wouldn’t tell me….To be honest, I sat in a room with Cody [brother] and he wants to see you but he is so afraid of what mom tells him…I know that mom still loves you. Dad, I’m the same person as you. I’m the same as you….Why are you becoming a minister? Dad, that’s retarded. Are you becoming a minister to prove yourself? You don’t have to be a minister to stay sober…I know that mom’s drinking did not keep you sober. Mom, shouldn’t drink, I know.”