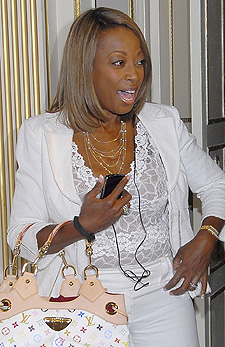 Star Jones is finally admitting that gastric bypass surgery is the secret behind her headline-making weight loss.

In the September issue of Glamour Magazine, Star admits that she underwent the surgery in 2003.

But she didn’t speak up at first because she was terrified the surgery wouldn’t work.

“I had spent my entire adult life telling everyone that I was fine with the way I looked,” she said in the first-person essay. “I never thought I'd have to explain it. But the complete truth is, I was scared of what people might think of me."

Star, 45, admitted that she actually ballooned to 307 pounds on the day of her surgery.

“Whenever I felt lonely, a Double Whopper with cheese became my friend,” she said. “If I felt sad, six strips of bacon made me feel better."

After her successful surgery, she said she denied reports of the procedure because she hadn’t expected so much public scrutiny. Instead, she would only admit to a “medical intervention.”

But the former “The View” co-host says she decided to come forward with the support of her husband, Al Reynolds, and therapy.

"I'm not saying that in order to be happy, women need to be a certain size, but I am saying that we should all strive to be healthy," Star said.

In other “View” news, “Extra” has learned Star’s replacement will officially be announced tomorrow.

What Does Brad Pitt Smell Like? And More Celeb Secrets from… 9