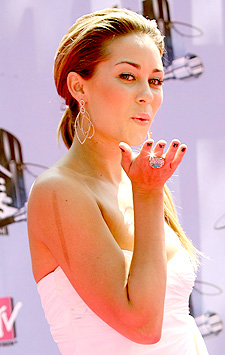 Blonde, beautiful and only 21, "The Hills" star Lauren Conrad has it all!

She was just 18 when she became a star on "Laguna Beach," and now the "It Girl" of reality television is the new face of Mark cosmetics.

Now Lauren, known as "LC" to her friends and fans, is giving "Extra" an inside look at her fashion-forward world and breaking news about her future.

"My favorite mark product is their 'On the Edge' black liquid liner," says Lauren. "I wear it everyday because I'm addicted to it!"

The California girl also admits she doesn't get her gorgeous glow from the sun--she's got a skin-tastic secret.

"Bronzer is good because it's good to kind of brighten up your face," she says.

The fashion-forward starlet is a student at L.A.'s Fashion Institute of Design and Merchandising and she's got a killer internship at Teen Vogue.

"There's a lot of mini dresses, empire cuts," she explains. "It's a line that's not just made for skinny girls."

And LC may be loving the limelight now, but she doesn't want the fame for long.

"I don't think I could do this for much longer," admits Lauren. "That's why I wanted to start really young, get my career done and have a family and settle down."

No reality check need for this star!