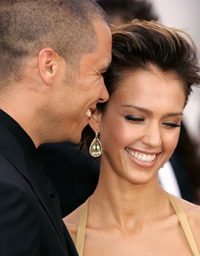 Rumors of a breakup between Jessica Alba and producer boyfriend Cash Warren began last week, but the pair was seen having lunch in West Hollywood on Friday!

The camera-conscious pair hid their faces while arriving, but paparazzi snapped photos of the couple making a possible reconciliation.

Alba, who told "Extra," "I never talk about my private life," sure had people guessing when she and Warren left the restaurant separately, but ended up in the same car!

New Details on What Killed Model Stefanie Sherk at 43 4

Cameron Boyce’s Family Confirms Details About His Death, Plus: His… 5