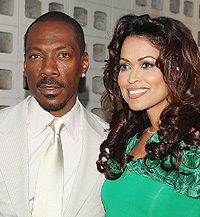 Eddie Murphy has popped the question to girlfriend Tracey Edmonds, "Extra" has confirmed.

It looks like Eddie proposed last week. At the July 23 premiere of "Who’s Your Caddy?” Tracey was sporting off a huge diamond ring – but she denied an engagement!

Eddie, 46, and film producer Tracey, 40, have been dating for nearly a year. Eddie has five children from his 12-year marriage to Nicole Mitchell, and Tracey has sons from her 13-year marriage to Kenneth “Babyface” Edmonds.

Sources tell "Extra" that no wedding date has been set.